ReSound: Kathak in the Streets
More 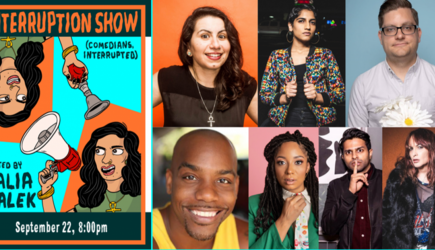 It has traveled to SF Sketchfest in San Francisco, the Ha Ha Harvest Comedy Festival in Portland, & the Edinburgh Fringe Festival in Scotland. Come see why both audiences & comedians keep coming back to Interruption Show. No two shows are alike! "…Being interrupted and prompted with insightful questions will have you on your feet, creating on the spot or remembering older material, and fall in love with the craft all over again. Both audiences and acts should be giving the Interruption Show a look." – Funny Women, UK (Edinburgh Fringe Festival 2018) "It's great fun to do, and to watch. It creates a really warm atmosphere between performer and audience and opens up the routine and the experience that generated it into surprising new ideas." – Nick Revell, (BBC writer, actor, and stand-up comedian) "Egyptian-American comic Dalia Malek, who cut her teeth on the UK circuit, hosts this format where she's essentially the most irritating audience member possible…" — Chortle UK, Today's Best Comedy on Demand 2020

PROOF OF VACCINATION REQUIRED. TICKETS MUST BE PURCHASED IN ADVANCE ONLINE.